In 1954 in order to increase membership, savings and assets, members of the credit union were divided into six groups, consisting of approximately twelve (12) persons under a leader. The group had the responsibility of recruiting new members and encouraging its members to serve in the union as well. Charts were set up in CLICO’s Head Office reception area at 32 St. Vincent St, Port of Spain, at this time the Agency’s Department was upstairs this building. This chart showed the progress of the different savings groups, resulting in keen competition between members. Miss Millicent Waldropt a staff member took the lead in the competition. As a result of this friendly rivalry and Mr. Monsanto motivations savings by members rose by 500%.

Some of the early rules were: Only employees were eligible for membership; persons were admitted as members only through the approval from the committee of management by secret ballot; application for membership was made in writing to the secretary for approval by the committee; no approval was given unless the applicant was recommended by a member of the CLICO Credit Union; the negative votes of two members of the screening management committee could have rejected an application; an application fee of twenty five cents had to accompany each application and this fee was returned if the application was rejected; shares were paid for by weekly or fortnightly payments of 25 cents; a fine not exceeding five cents in respect of every installment in arrears for a period of 28 days, but this fine was hardly implemented since Mr. Monsanto had procedures in place for an efficient collection of payments.

Expansion of the CLICO Credit Union Locally and Regionally

In 1954, Mr. Monsanto continued to emphasize to the staff and agents that the major aims of the Credit Union was to develop a greater appreciation for thrift and to maximize the financial returns to its membership. By 1955 over 700 societies had been registered in Trinidad and Tobago with 51,000 members. Of this nearly 650 were Credit Societies, over 400 being agricultural credit societies and the remainder Credit Unions. This year saw an increase in the amount of CLICO employees who were assisted by the credit union with sending their children to school, purchasing homes, land, bicycles (to conduct their sales), and radiograms. In 1956 Mr. Monsanto was promoted to the post of Superintendent of Agencies at CLICO. This meant that he was now in charge of overseeing the sales force of the branch offices that he was instrumental in opening in Grenada in 1946, Guyana 1947, Antigua 1949, Barbados, St. Vincent, St. Kitts and St. Lucia and Tobago and Aruba 1953. During the fifties as CLICO expanded its branch offices locally and throughout the region, so too did the Credit Union and the cooperative concept. He preached the gospel of thrift throughout the region, educating all his agents about this concept of saving and investment.

In 1954, after CLICO’s present head office at 29 St. Vincent Street was opened, Mr. Monsanto established a Consumer Co-operative (bulk buying and selling) which was named – DOSHCO. This was made available to all employees of CLICO and the CLICO Credit Union Executives were responsible for its operations. It was located on the compound of CLICO Building. 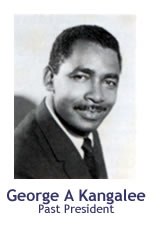 In August 1957, because of the demands of his portfolio as Superintendent of Agencies Mr. Monsanto did not offer himself for reelection as President, but he kept a keen interest in the activities of the organization.

On August 20, 1957 the late George Alfred Kangalee was appointed President of the Union. He was the Union’s Vice President for many years serving under Mr. Monsanto’s leadership. Upon his appointment he made a passionate appeal to members to take their Credit Union more seriously by attending meetings and increasing their savings. Thereafter, members showed renewed enthusiasm. He brought to the Union years of management skills he had gained while working at CLICO and the various organizations which he served. He did not offer himself for reelection in 1960 because of his work load at CLICO and other social commitments.