Home / About Us / History / New Transformation

The mid-nineties ushered in a brand new style of Leader-ship to CLICO Credit Union, under the Presidency of Louis André Monteil.

Louis André Monteil, a long-standing Member/Shareholder of CLICO Credit Union was elected to serve on the Board of Directors at its 45th Annual General Meeting on Tuesday April 12th 1994. L.A. 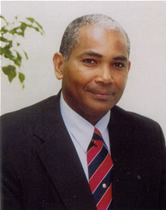 Monteil, accepted the mantle of President of CLICO Credit Union, when elected by his Board colleagues, at the first meeting of the Board. A Board qualified and dedicated with a vision, poised to position the CLICO Credit Union as a successful twenty-first (21st) Century organization. Assuming the position of President, the Credit Union witnessed a new Transformation, of financial knowledge in the area of investment, risk management and astute management principles, which contributed to tremendous positive turnaround in the operations of the Credit Union. He immediately went into action to assign responsibilities to the various executive members in their areas of competency. A comprehensive strategic programme was developed which charted the path towards increased membership and financial growth! The Board placed direct attention on marketing the Credit Union and on Delinquency control.

In 1995 the CLICO Credit Union Mission Statement was introduced which read:

“Our Mission is to offer innovative service to our members through investment opportunities that will ensure a fair return on their investment, provide for positive self-development through a co-operative effort and to operate in a manner that will inspire and instill Confidence and Trust.”

By the end of 1995, the Asset Base of the Credit Union increased dramatically to $10.5m with a Share Capital of $8.6m. The Net Surplus for 1995 shot up to $506,972 from $199,715 of the previous year and membership grew by two hundred and seven (207) new members bringing the total membership to 1319 members as of December 1995. At it’s 47th Annual General Meeting the CLICO Credit Union bid farewell to longstanding Secretary/Manager, Beryl Jones-Gooding on her retirement from CLICO Credit Union and at the same meeting welcomed her successor, Dianne Howard-Devonish (Mrs.).

Dianne Howard-Devonish joined CLICO Credit Union on February 1st 1996 and was appointed Secretary to the Board of the Credit Union. She brought to the Organization a Fresh style of Management professionalism, Office decorum and Deportment, the likes of which the Organization had not seen previously. As CLICO Credit Union approached the close of another decade, the period 1995-1999 emphasized a strategy of direction fuelled with a unique style of Marketing and Customer Service delivery, the results of which evidenced escalating growth and further expansion – a success story, a milestone for CLICO Credit Union – platform from which the Organization was well poised to spring into the new millennium, equipped to offer the Membership Body unmatched opportunities in quality financial services and satisfaction.

Each year seemed to be ushered in with a certain measure of quiet enthusiasm and optimism about the future of CLICO Credit Union following very credible performance of the previous year. With further growth and expansion being generated in each passing year and more so, at the substantially higher level than the previous year culminating in Net Surpluses in excess of $1Million. The Board of Directors and Management were resolute in their quest for “Creative and Unique” strategies and solutions to accelerate the Growth and Expansion of the Organization.

At the close of the decade December 31, 1999, CLICO Credit Union experienced another exceptionally good year of steady growth and expansion, while devoting much time and effort to ensure that systems were ready to move into the new millennium. The Leadership i.e. the Board and Management endeavoured to maintain a safe and financially secure Credit Union, in this regard a strong Capital base was maintained ending the decade with Net Surplus in excess of $1.7Million, some twenty-nine percent (29%) in excess of projected figure for that period, December 31, 1999. A marked increase in Loan and Share Deposits, evidenced members continued confidence in CLICO Credit Union. Total assets increased to a record high of over twenty-one percent (21%), while net loans volume increased by $1.991Million. Over three thousand (3000) members benefited from our financial products, expanded education programmes and convenient service delivery.

Previous: Introduction of the Christmas Savings Plan
Next: The New Millennium